The Ghost has won an "Eddy," awarded by the editors of The Morning News:

Billing itself as “The Weekly Newsletter You Print Out at Work,” The New-York Ghost, in fact, operates on a much deeper level—and not just its content, which contains peppery bites like realizing you’re dreaming when reading an interview with Bill Cosby and noticing “The Times decided to print Cosby’s phone number, just as they do the number of every interview subject.” By offering each issue through email only, what the Ghost has managed to do—unlike many of its web compatriots—is turn the expectation of content into the thrill of finding a new issue in your inbox. It works just like, you know, a real magazine.

OCD — and a reading

The latest Ghost features Angela Wagner's "Oh, I Wish I Could Drive There," a harrowingly hilarious account of taking the subway each day—when you're scared of germs.

For a free trial issue or subscription, drop us a line: newyorkghostATgmailDOTcom.

* * *
And tonight (Wed. 5/21) at 7 p.m., don't miss Ghost founder Ed Park, reading from his debut novel Personal Days at McNally Robinson bookstore (52 Prince Street). The reading will be followed by a discussion with his editor, Julia Cheiffetz, and a signing. Stop by and say hi!

Welcome to the working weak: reading Personal Days—the debut novel by Ed Park, a founding editor of The Believer—is like staying late at the office, drunk on cough syrup, and coming across the diary of the person who occupied your desk a year before you did. In this intricate, hysterical novel, an unnamed New York office is being downsized according to indecipherable commands. Park's hilarious take on such cubicle routines as ordering lunch, hunting for a stapler, and joining the softball team will strike a chord with anyone who's ever done the 9-to-5, while the shocking shifts in tone perfectly convey the violence of corporate downsizing.

Welcome to the Working Weak

Ghost publisher Ed Park will be appearing in New York—and around the country!—to read from his debut novel, Personal Days.

The first event is Wednesday, May 21, at McNally Robinson (NYC)—click here for more information.

And then it's on to:

For more detailed information about these dates, visit Ed's website, where you can also buy the book, read a sample, and much more. 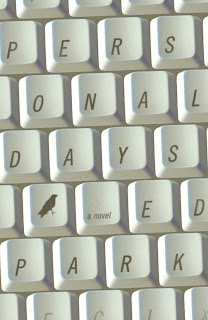 The ad/edit wall breaks down completely this week, as the Ghost devotes its entire issue to shilling for Ed Park's new novel, Personal Days.

For a trial issue or free subscription, write to newyorkghostATgmailDOTcom.

‘I would go to museums but I wouldn’t see anything. Perhaps it was because of a period of temporary blindness in which I could take in nothing, perhaps because everything about museums seems to me cold and calculating, the very space between the paintings, the color of the walls, blank and inoffensive, but suggesting nothing of art, nor of life...’

Read the full account in the latest Ghost. For a free issue or subscription, write to thenyghost2ATgmailDOTcom.

...and while you're at it...if you're curious...why not pre-order a copy of Ghost publisher Ed Park's new novel, Personal Days? It's priced to move...Wired calls it "hysterical"...and Elle calls it "chilling, compulsive, and hilarious"...